Since 2005, the plans for the 220 Central Park building have been rumored, and now it seems that the rumors are finally coming into fruition.

Developer Vornado has finally won the fight and plans to go ahead and create a visionary new luxury condo structure. The building will be slim with a limestone facade and consist of a 920-foot high tower, coupled with a smaller building with an entrance on 58th street, rising 14 stories. To keep things exclusive, as well as utilize the slim space of the tower, rumor has it that there will be only one residence per floor. Current renderings of the project indicate that the homes will feature floor-to-ceiling windows, coffered ceilings, ornate fireplaces, and herringbone floors.

Since first buying the building, original plans included tearing down the existing structure to replace it with a glassy, 41-story tower. However, the project has been plagued with messy legal battles from prior renters, and now it seems that the tenants have all left and received compensation, the actual project could get started. 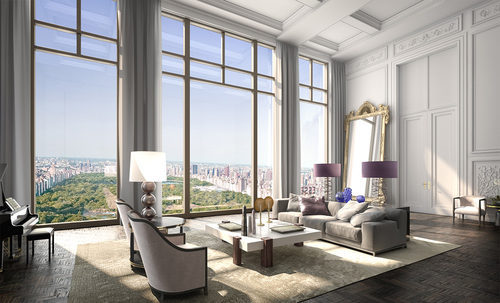 Even after the tenants were made to leave, below the ground a rival development company, Extell had offices as well as plans to construct their supertower One57 in the vicinity, which 220 Central Park would interfere with. Also, complicating matters was a below-ground parking garage underneath the building that Extell held and was needed by Vornado to start the project. Now it seems that both parties have made peace, via a $194 million price tag for the parking garage and development rights, and Extell will adjust its project so that 220 Central Park can go ahead. 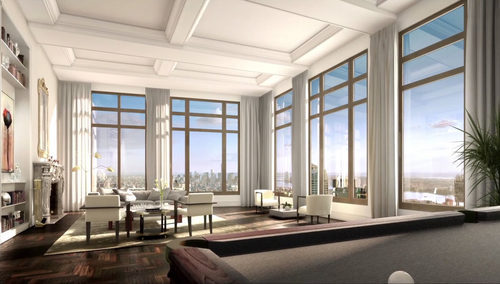 The architect attached to the building is postmodern designer Robert A.M. Stern, who is also behind the acclaimed 15 Central Park West building. Stern’s backing is putting 220 Central Park on track for being the city’s next significant development. Already there is a buzz about the stunning grand entrance, which features a reflecting pool and vehicle courtyard similar to that of 15 Central Park West. Stern’s postmodern designs have made him a favorite pick for luxury developers around Manhattan as his projects are contemporary without losing style.

The new building is said to be as luxurious and spectacular as similar projects going up around the city, including One57, 432 Park Avenue, 111 West 57th Street and 217 West 57th Street, but better.