49 Chambers is the height of luxury living in the heart of Tribeca. A combination of quality, craftsmanship, and collaboration between The Chetrit Group, Gabellini Sheppard, and Woods Bagot, the old Emigrant Industrial Savings Bank is destined to become one of the most sought-after luxury condos in the city.

Built in what was once the Emigrant Industrial Savings Bank, 49 Chambers is nothing short of spectacular. Completed in 1912 in the Beaux-Arts style, the H-style building was once the largest bank in the US.

To say that Woods Bagot had an incredible canvas to work with is a gross understatement. But with such a stately exterior, the bar was set incredibly high for the Architect of Record.

Fortunately, Woods Bagot is more than up to the challenge. To allow the intricate stonework and iconic lions heads shine, Woods Bagot opted for a sleek contrasting minimalism. The arched entranceway mirrors the liens of the building and highlights the stunning bronze-clad doors.

And while the main lobby is going to be leased to a commercial tenant, condo residents can enter through their private entrance on the side of the building, where a cool, modern lobby contrasts brilliantly with the detailed reliefs, sculptures, and opulence so iconic of the beaux-arts style. 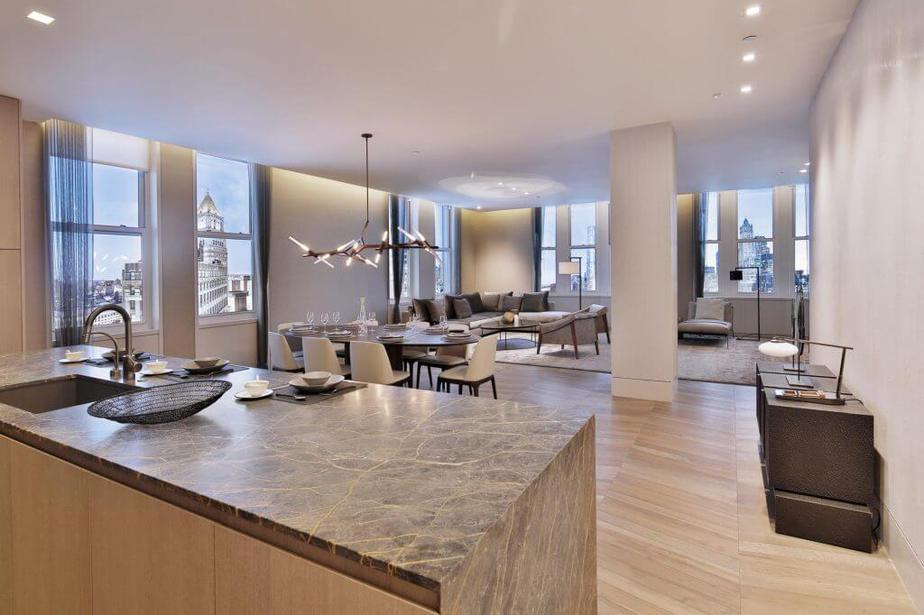 The landmark building was the city’s first H style skyscraper, letting light to penetrate deep into every single floor. That iconic design still holds sway and has shaped the design of the apartments inside.

High ceilings and big windows create a clear, open space. Combined with great rooms and open floorplans, it makes for large, light, modern apartments that capitalize on every ounce of light pouring through the bay windows.
And within this framework, Gabellini Sheppard has filled the space with the best possible finishings.

The kitchens are completed with San Marino marble counters and waterfall island and a Corian sink, with Cypress wood offsetting the dark marble beautifully.

Appliances are the best of everything, with Wolf ovens, Gaggenau stoves, Miele dishwashers, and Sub-Zero wine fridges and fridge/freezers. 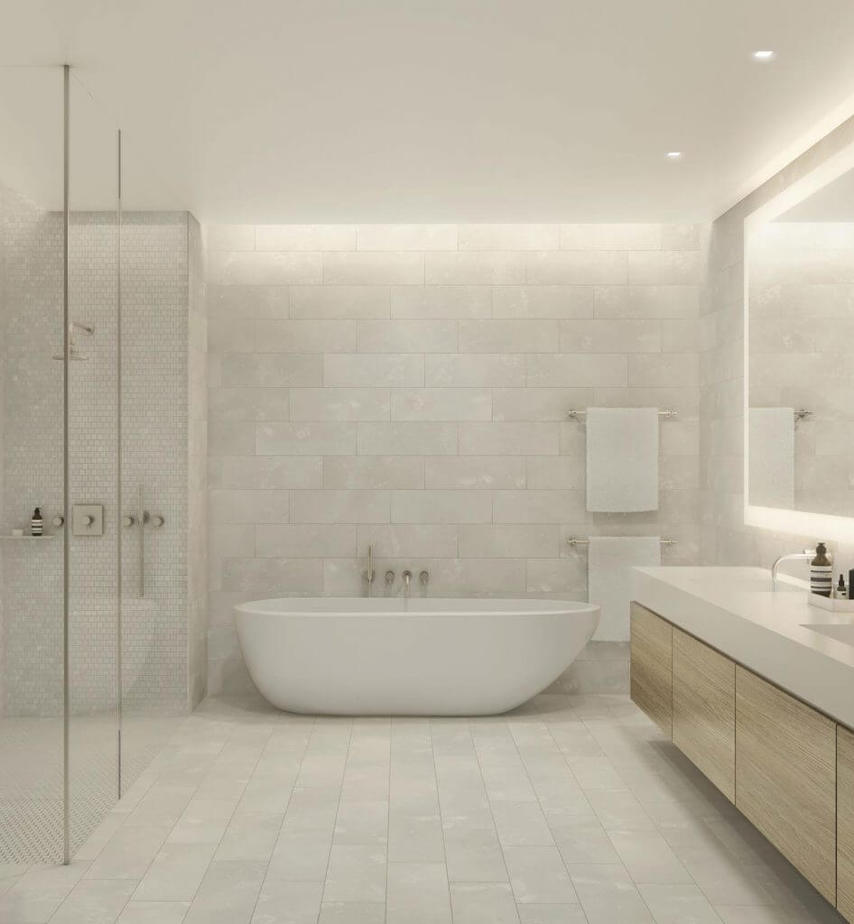 Second bathrooms and vanities are completed in light grays and warm woods, with Athens Graystone with sandstone tiles and mosaics providing light relief. Glassed in showers are functional and modern while floating vanities create a sense of space.

Finally, you come to the master bedrooms. Completed with oversized windows and raised ceilings for a brilliantly proportioned space, it’s an elegant and simple experience that turns the bedroom into a cool oasis to retreat from the world. 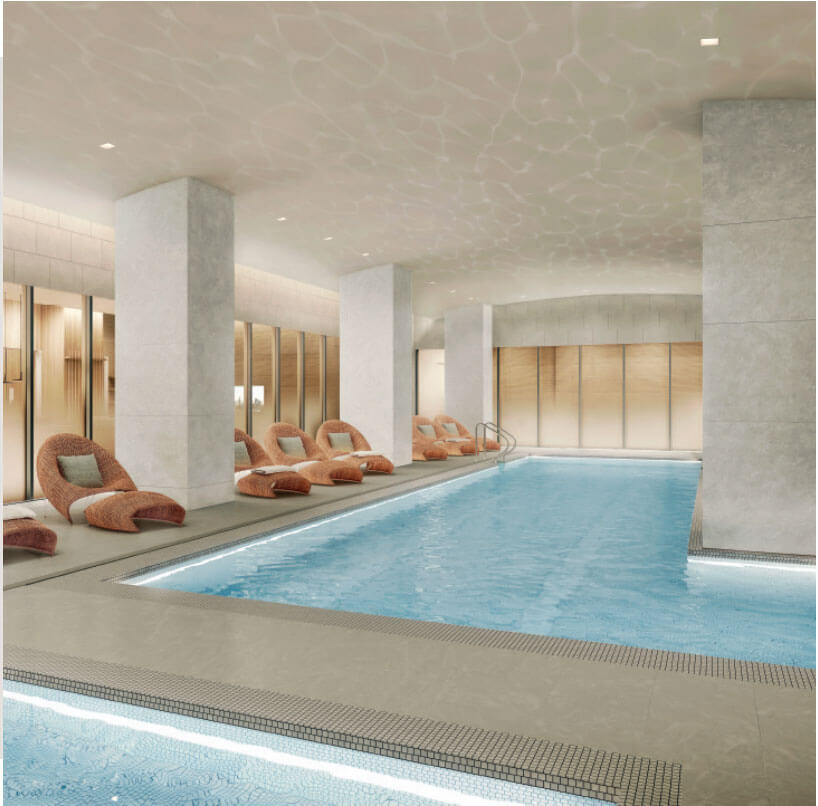 49 Chambers Street comes with a laundry list of amenities for the complete package for residents.
A well-appointed lobby and 24/7 concierge, along with additional storage and bike storage make your life easy.
And no matter what you do to relax, you can do it in 49 Chambers – and in style.

Unwind in the hammam spa, carved in a cool Ariel marble and complete with sauna and steam room. Or work up a sweat in the on-premises fitness center or pool before stretching out in the yoga studio. Private lockers, change rooms, and chaise lounges make the facilities faster and simpler to use than ever before.

After hours, gather with friends in the resident’s lounge, prep a beautiful meal in the catered kitchen, play some virtual golf, or just kick back and relax in your private movie theater. And with plenty of outdoor garden and rooftop patio space, it’s easy to move the party outside.

And with both a playroom and a lounge, there’s something for everyone at 49 Chambers.

Two bedroom units start at $2.8 million for a 2-bed, 2-bath north-facing unit. Long and thin, the unit makes excellent use of space and with the tall ceilings and single hallway design, feels more like an old-world villa than a modern apartment.

At the top end of the 2-bed range is a 2,200-square foot corner unit with bay windows in the second bedroom, a corner master suite, and a breakfast nook, rolling in at a hair over $4 million. These units are spread between the 7th and 12th floors, but currently are only available on the 7th.

Three bedroom units start at $5 million for 2,900 square feet of space with bay windows in the living, dining, master, and both bedrooms, and go up to $6.9 million. This gets you 3,300 square feet of living space set in a corner unit, including a window-lined great room, private study, and bay windows lining one wall. Each bedroom also has bay windows to let in plenty of light. These units are only on the 15th floor.

Tribeca has plenty to offer to the future residents of 49 Chambers. Directly across the street is the famed City Hall Park. Head north, and you wander directly into the heart of Tribeca, where cobbled streets house some of the best fashion and high-end retailers sit shoulder to shoulder with Michelin star restaurants.

49 Chambers is more than just a condo tower. Housed in one of the most iconic buildings in the city and sitting in easily one of the most desirable neighborhoods, it’s not wondering this development has been so long awaited. And with impeccable design and execution, it’s safe to say 49 Chambers was worth the wait.