In the battle of the boroughs, no matchup is more contentious than a head to head fight between Manhattan vs. Brooklyn. If you want to inflame the passions of your fellow bar dwellers or coffee swillers, asking which is better can cause a fiery debate, at best, or even an all-out brawl.

To ask the question of which borough bests the other is also to propose a profoundly personal question. Who am I, and what is important to me? So keep an open mind as we ring the bell for the cage fight of the decade to figure out which borough owns New York.

Brooklyn’s population has been out-pacing Manhattan for years and now tops it by over 1 million people. In a Braveheart-style, head-to-head battlefield matchup, Brooklyn would overwhelm Manhattan in sheer size by almost 2 to 3. Over the last two decades, Brooklyn has also grown at a faster pace than Manhattan. Fueled by the more affordable housing and larger landmass, moving to Brooklyn has historically meant a bigger bang for your buck in the housing market. That gap, however, is shrinking as housing prices in both boroughs continue to rise.

Thinking of the boroughs in a purely stereotypical view gives way to images of Wall Street yuppies of Manhattan and bearded baristas in Brooklyn. The numbers, though, don’t reflect that. The population of 25 to 34-year-olds in Manhattan is a whopping 22.6% while Brooklyn comes in at 17.8% within the same demographic.

The idea that Brooklyn is both younger and hipper is mostly untrue. Manhattan is, at least, more youthful. The population of Manhattan is also more educated, with nearly twice as many college graduates as Brooklyn. Plus, the per capita income is over twice as much.

In a head-to-head matchup, when it comes to street crime, you’d be forgiven if you immediately declare Manhattan vs. Brooklyn, the winner with the lowest crime rate. I mean, half of Goodfellas takes place on the mean streets of Brooklyn, right? Well, if you do think that Brooklyn has more crime than Manhattan, you would be flat out wrong.

Crime rates have fallen drastically in New York since the 1990s, but you still have a 20% higher chance of being the victim of a crime if you are in Manhattan. While Brooklyn has a slightly higher violent crime rate, property crime such as burglary, theft, and motor vehicle theft is significantly higher in Manhattan.

Frankly, we blame all the tourists staring up at the Empire State Building or staring down at Google Maps instead of paying attention to their surroundings or who they’re about to walk into–but I’ll let you come to your conclusions.

Numbers don’t mean everything, and demographics can only tell part of the story. To live in Brooklyn vs. Manhattan is mostly a personal choice. Where you work, what you can afford, and how you like to spend your time is mainly going to dictate who wins in your mind. Our diplomatic side will tell you that you can’t go wrong either way. Both places are cool. Both boroughs are fun. It’s even possible to love both Brooklyn and Manhattan. 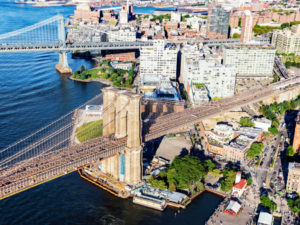 Manhattan vs. Brooklyn: Who is Winning Battle?

The media loves to talk about real estate prices in New York City’s boroughs. More often than not, what gets reported isn’t exactly the entire truth. Biased reporting often skews the reality of New York City’s real estate market. That leaves people wondering who the real winner is in the real estate battle: Manhattan or Brooklyn?

In Manhattan, listings stayed on the market for 115 days during the same quarter.

The view of New York City real estate gets a little cloudier when one considers property listing discounts.

One could interpret this to mean that Brooklyn’s popularity changes significantly from quarter to quarter while Manhattans remain more consistent. If Brooklyn real estate buyers can bring prices down by more than 16 percent, sellers either want to move quickly, or they set their listing prices incredibly high. However, the 1.1 percent listing discount shows that sellers have more interested buyers during some quarters.

Average Prices Are Higher in Manhattan Than in Brooklyn

Buyers looking to live in properties often have different perspectives than buyers who just want good investments.
The average sales price in Brooklyn for Q1 2014 was $681,182, and Manhattans were $1,773,523 during the same quarter. Median prices were also higher in Manhattan ($972,428) than in Brooklyn ($520,000). It’s more affordable to purchase real estate in Brooklyn.

Whether buying property to live in or invest, it’s important to consider that luxury sales skew average prices higher.

Knowing these numbers, which borough do you think it’s best to buy in? What factors affect your decision most?

So who wins in the battle of Manhattan vs. Brooklyn?

Buying in Manhattan vs. Brooklyn: A Cost Comparison

If you pay any attention to the New York City real estate market, you’re well aware of the skyrocketing prices throughout the five boroughs. But most recently, word on the street is that Brooklyn, which used to offer more affordable housing options, has caught up with Manhattan prices.

Let’s take a look at how much or less it costs to live in areas of  Manhattan vs. Brooklyn, similar neighborhoods.

Upper West Side vs. Park Slope

One-bedroom co-ops in the heart of the Upper West Side are plentiful, with a variety of options available in the 70s, 80s, and 90s. Most probably fall into the $600,000 to $800,000 range with about 600-750 square feet. Although Park Slope’s prices seem comparable, this Brooklyn neighborhood doesn’t have the same amount of inventory as the Upper West. Average one-bedrooms are in demand in Park Slope, so you’ll have fewer to choose from but pay close to the same price.

Although the West Village and Brooklyn Heights carry similar storybook charm, most brownstone prices in the Village are undoubtedly higher. With numerous West Village row homes priced upwards of $10 million, you can expect to pay more in the $6 million range in The Heights. According to Streeteasy.com, Brooklyn Heights does boast a handful of larger-scale townhouses (more than 6,000 square feet) above the $10 million price point. Still, the West Village remains the more expensive of the two.

Two-bedroom condo prices run the gamut in both neighborhoods. More substantial, newer units fall in the range of $1 million or higher in Central Harlem, but you can expect to pay well under $1 million in Bed-Stuy. Both sections of town have a good number of listings on the market, but at this time, you’ll score a better deal in Bedford-Stuyvesant. Note: This section of Brooklyn also includes Stuyvesant Heights.

Prices for a condo studio in these neighborhoods are neck in neck. Expect to pay an average of about $750,000 for a one-room apartment in these hip, happening nabes within walking distance to some of the hottest restaurants and watering holes in the entire city. Studio inventory is limited. Williamsburg takes the lead on larger apartments by a landslide, with many one-bedroom condos coming in just under or slightly higher than $1 million.

Prices in Midtown West (also considered Hell’s Kitchen or Clinton) are steeper than Brooklyn’s downtown, where you should expect to pay about $500,000 for a one-bedroom co-op. A large market for pied-a-terre’s, Midtown offers a few apartments in this price range, but more spacious units exceed $1 million.

Fi-Di takes the lead with more available listings at higher prices. Most two-bedroom condos in DUMBO fall in the $2 million range (a few hovers around the $3 million mark), but the Financial District offers pricier two-bedroom options up to $10 million.