Million Dollar Listing New York’s first season drew over one million views per episode, and there’s no wonder. It’s an enticing combination of glamorous New York City real estate, rivalries, and drama. It makes for fantastic television, but does it really give an accurate impression of how the real estate market works in New York?
In a word: no.

Here are three little ways in which the show bends the truth into a pretzel.

Yes, the show stars three real New York City brokers; however, when they’re on camera, they’re acting. According to a source who spoke with previously.tv, the “sleazy fool” that appears on Million Dollar Listing “bears a very little resemblance to the real Ryan.”

Even moments that were supposed to be candid were completely fabricated. According to Michael Lober, a broker with Elliman who decided to quit the show after its first season, he was filmed “getting ready for his day” in the middle of the afternoon in an apartment that he had to rent specifically for the shoot because his own wouldn’t allow it. “It was so stupid,” he told the New York Times. 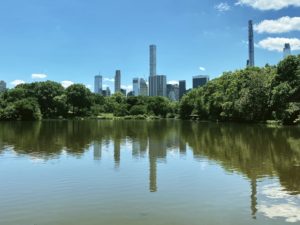 A year ago, all three Million Dollar Listing agents did an interview with a real estate blog. In this interview, they’re all professional, polite and seem to get along perfectly. Apparently, this interview didn’t attract the views it was supposed to because, again according to previously.tv, “nobody wants to watch something where everyone agrees.”

Fast forward into filming and you get crazy stunts like Ryan Serhant jumping into a pool in nothing but his dress slacks at one of Fredrik Eklund’s open houses. If Ryan and Fredrik were on the same team, you could understand how this would embarrass Fredrik. As it is, however, a rival broker stripping to the waist and jumping into the pool in the middle of an open house makes Fredrik look incredibly sane and stable by comparison.

Seen in that light, Ryan’s stunt might be beneficial for Fredrik, making his response to Ryan (“I’m telling you right now, don’t ever come to one of my open houses again.”) obviously scripted.

According to Holly Parker, an Elliman broker, the show staged a party at 100 11th Avenue – a penthouse that Ms. Parker had already sold.  This party was to introduce brokers to the property, but Ms. Parker already had a signed contract. The men and women at the party had to have known that the listing wasn’t really available, which would change the way they acted at the party.

Ms. Parker said the show is, “all make-believe,” and, from incidents like this party and Ryan Serhant’s pool dive, it’s hard to disagree. The brokers on the show don’t act as they would in real life, the drama is fabricated for the audience’s entertainment, and most of the events are completely staged.

Bottom line: if you want to watch some entertaining television, watch Million Dollar Listing New York. If you want to actually learn about the New York City real estate market, consult with an actual agent.