New York’s urban fabric has always been in flux. Manhattan, in particular, has come unbelievably far from its boomtown roots as an oyster-shelling paradise. 21st Century Manhattan is marked by a huge amount of industrial diversity, and a greater amount of capital. The rate at which monumental structures are being commissioned on the island is only increasing, which is really saying something when you consider how many landmarks have already been fixtures for decades. and here we can identify something of a sea change.

Now more than ever, the grandeur of New York’s architecture is in housing. Lower Manhattan has cemented itself as one of the U.S’s most desired living places, and the world’s best and most coveted designers been given notice. And so, here in 2017 New York, we are continuing to see a prominent showing from starchitects who want to try their hands at authoring Manhattan’s next great residential building.

So what exactly is a starchitect? The term itself has been floating around for some time now, and its popularity makes perfect sense. Design culture and its progenitors are slowly but surely making their way into the pop-culture sphere. Tom Ford hires Tadao Ando, Tobey Mcguire hires Peter Zumthor, etc. As the cultural crossover continues the public’s interest in the world of high design will become stronger and stronger. After all, what could lead the layman to a greater appreciation of design if not the idolization of the designer?

In the past 5 years, Bjarke Ingels Group, Zaha Hadid Architects, Robert A.M. Stern, Frank Gehry, Annabelle Selldorf, and OMA (Rem Koolhaas) to name a modest handful have either completed or begun construction on large scale residential projects across the island.

These buildings service a particularly high-income demographic, and there will not be criticism inherent in this decision on the part of the architect. High-end residential projects in Manhattan have become symbols of the death grip that the international elite have on the lower half of the Island. Since its completion, Rafael Vinoly’s needle-thin 432 Park Avenue has become a totem to the garish wealth that has been agglomerating along the edge of Central Park. Also on the park, Robert A.M Stern’s 15 Central Park West, just one of many projects the architect has designed in the Manhattan’s residential sector in the recent past, adding to his impressive resume on the East Coast.

Neil Denari’s Highline 23 is a headlining act in a series of high-profile projects which have popped up adjacent to the repurposed subway line and made the area that much less affordable in the process. Starchitects involvement in cases such as these gives a face to the condition of gentrification in urban spaces, and so they’re rebuked; as sellouts, elitists, or any other moniker you could hand to a person who deals closely with great amounts of wealth.

These gripes aren’t unfounded. Still, it’s important to remember that for as long as the conception of a better, more thoughtful shelter has been a conscious effort (i.e. the beginning of human history), exceptional work has pooled alongside exceptional amounts of resource. It seems unjust to chastise New York’s next wave of designs from our most cherished designers based solely on financial underpinnings, especially when Manhattan offers so many ways to appreciate architecture beyond the statistics. For instance, there’s the skyline appeal. It should go without saying that New York’s skyline is essentially not comparable with that of any other North American City, although we’ll give honorable mentions to Chicago, Seattle, and San Francisco for the sake of good sportsmanship. Observing the skyline is more than just enjoyable, it’s mesmerizing and cathartic. From this angle, it seems wholly exciting that a group like Herzog & de Meuron would take on a high-rise commission in lower Manhattan, and not just for those who have the opportunity to live in it.

And then there’s the bottom line. In my time in New York, I’ve arrived at some simple conclusions on the matter. It can only be a good thing that starchitects exist, if only for the public to use the name as a means of remembering that there is something worth thinking about in the buildings that surround us. It’s also important to remember that those names have power for a reason, whether you’re a prospective tenant or an aimless twenty-something, New Yorkers are living in a time when they can expect consistently interesting housing to continue to appear on the horizon, or just around the corner. That, if nothing else, is something worth celebrating. 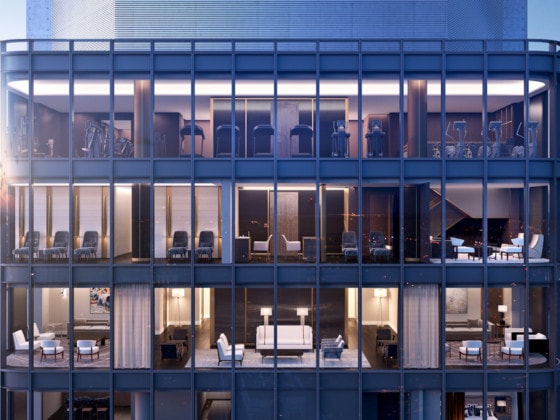