Everything’s coming up condos in New York City, or so it seems. Two of downtown’s latest creations lie in the chic Nolita neighborhood. Hamlin Ventures and Time Equities are the developers behind 34 Prince, which is expected to include seven loft-style condos and two sprawling 9,000-square-foot townhouses, one of which will be constructed of glass. The duo paid just over $30 million for the Federal-style building –– the former home St. Patrick’s Old Cathedral School.

Once an orphanage, the landmark building is located between Mott and Mulberry Streets. This structure boasts quite a bit of history, so for homebuyers seeking some quirkiness in their new residence, 34 Prince could be the ticket. Built from 1825-1826, it was the first Cathedral and the second Roman Catholic church built in Manhattan. Also the oldest Catholic school in New York City, the building closed in 2010, although it continued to host art exhibits and other special events. Filmmaker and director Martin Scorsese was a student at St. Patrick’s way back in the day. 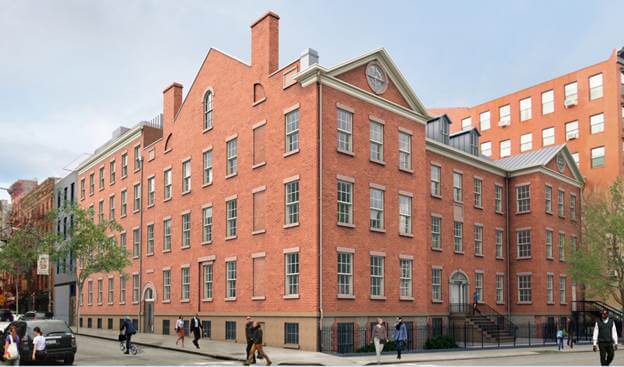 The condo apartments will be on the large side while prices will be on the high end. The units will range from 2,600 to 5,000 square feet, and a 2700-square-foot three-bedroom will list for more than $7.7 million. The townhouses are expected to come in at about 10,000 square feet. Some apartments will come with private outdoor spaces, which will come in handy since the area lacks green space.

While Marvel Architects heads the design team for this adaptive reuse project, CORE will handle the condo sales and Times Equities will manage the townhouses.

Beyond its historic past and stellar location, this conversion is considered one of the most unique condominium projects in the city and is still in development.

Close by at 152 Elizabeth, Japanese, Pritzker-Prize-winning starchitect, Tadao Ando, has put his architectural genius to work in the design of a “glass jewel box” building, which is expected to finish with seven apartments ranging from 1,950 to 5,600 square feet. No ordinary condo project, expect a backlit water wall extending from floor to ceiling, as well as a 55-foot-high green wall covered in seasonal vines. The architect aims to create a timeless sanctuary for each resident, one to which they can come home and escape the busyness of the city that never sleeps. For example, the building’s windows are constructed of airport-quality glass to block city noise.

Developers Sumaida + Khurana and designers from Gabellini Shepard head the team. Interiors will utilize four main concepts: light, air, sound and water. Michael Gabellini expects the units to stand the test of time, the craftsmanship to be high quality, and eventually passed down to the next generation rather than torn down and replaced.

Half-floor residences will list at $5.9 million, and full-floor apartments will start in the $15 million range. The penthouse will ask more than $35 million. “According to Ando, a home has to be a place where you can reflect on your life. This project is about that.”

For floor plans and renderings of 152 Elizabeth, head over the Curbed.com.